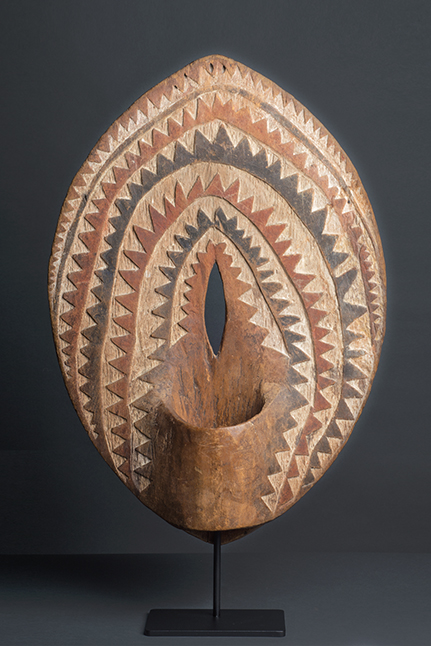 We are thrilled to own a painted leaf-shaped shield from the Central Highlands of Kenya, made by the Kikuyu people. This powerful and a pure form sculpture provides insight into an important rite-of-passage in Kikuyu culture.

This elegant object is not used in battle. lIt would stand high above the head of the dancer when worn, during initiation dances that precede a circumcision. Several boys are circumcised at one time during the ceremony and they form a distinct age set or rika. After the initiation the boys became warriors, and would participate in raids (particularly of the neighbouring Maasai’s livestock) and in defending their village.

Typically these wooden or bark shields, known as ndome have carved and serrated grooves in the zigzag patterns on the back of the shield that form an eye-like shape. There is always a hole at the center through which the dancer can peer. The front of the shield will usually have a pattern in the shape of an eye or eyelid.

In ‘Africa. The Art of a Continent’ (London, 1995), John Mack writes that the designs on ndome were not arbitrary.  They were specific to a territorial unit and an initiation period. Some boys scraped off the patterns on their inherited shields and replaced them with the ‘insignia’ of their initiation group.

The ndome were usually inherited as heirlooms, unless more than one boy in a family was being initiated, in which case a new shield would be commissioned from the muumburo, the craftsmen.

Sorry, the comment form is closed at this time.